Join our Discord to stay up to date on our latest announcements, product updates and more!
Previous 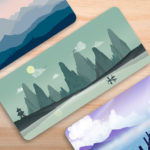 Here is the revival of GMK Wapuro with the approval of MacGruber117. I was hoping for a long time for this IC to be revived and finally I tackled it myself.

Between the typewriter era and the age of modern computers, Japan had to come up with a new input system as well as suited hardware for the task. Typing hardware… The 80s came and typing Japanese got incredibly easier thanks to the invention of the Japanese word processor by Sharp. Until then typing Japanese was an exceptionally slow and tedious task. 50 wpm got you a job at the time.

The whole concept of Wāpuro rōmaji (ワープロローマ字) revolves around using a qwerty keyboard with Roman letters to input Japanese characters. Simply put, the user’s keystrokes turn into kana on the screen and a drop down menu with choices narrowing down as you type will give you options to choose from.
Wāpuro inputs are standardized through the JIS (Japanese Industrial Standards) system of regulation, same concept as ANSI and ISO.
This keyset is an homage to the line of word processors from Sharp particularly. While they invented the first prototype in 1977, it took a few years for the machines to become reasonably sized and affordable. The logo font as well as visual elements in this IC are directly tied to what could be displayed on a word processor from the 80s, such as the Sharp WD-A330 or the Sony PJ-100 that this keyset is inspired from.

The Binepad BNR1 Rotary Encoder Knob Group Buy ends on January 17th! This QMK-compatible encoder is a versatile addition to any desktop! Dismiss